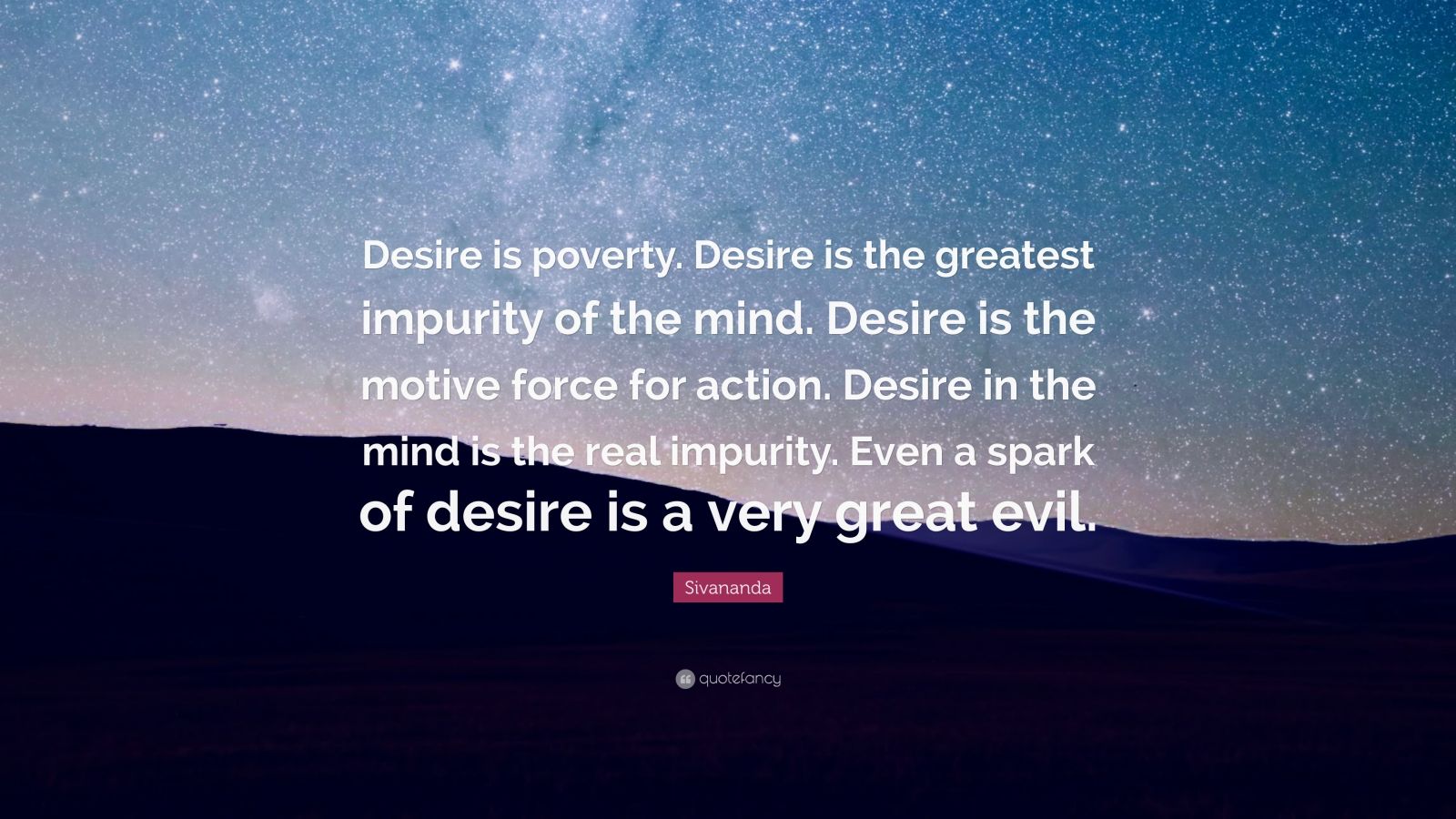 The greatest happiness for the soul starts with complete freedom: freedom from misery, unhappiness, suffering, freedom from the dictates of desires, and, ultimately, freedom from being trapped in a material body. But what keeps us ensnared in such a condition are the desires for sensual and mental pleasures. And the hardest freedom to attain is freedom from sex desire.

Yoga is for attaining this kind of complete freedom. However, this means freedom from material desires of all kinds. If you are still entrapped by the idea of needing your sensual, emotional, or mental desires fulfilled, then you are far from being free, mentally, intellectually, and certainly not spiritually. In other words, if you still have desires for the pursuit of sensual or mental pleasures and happiness, then you are still a servant of
your mind and senses. You are still a slave to the dictates of your mental and sensual impulses. You are still bound by the golden chains of the temporary illusion of chasing after pleasing the senses. They may be golden chains, but they are chains nonetheless. So how is that freedom? And how are you ever going to attain complete spiritual freedom with such desires creeping up and trying to tell you what you should do?

It is, however, one thing to have your mind on the loose giving you all kinds of weird ideas and desires for happiness. But it is another thing to be controlled by them and act them out. Sometimes the mind just goes crazy, but the intelligence knows better than to pursue such desires or ideas. This is called controlling the lower self by the higher self. This is not real freedom, but it is also far from being a complete slave under the command of the mind and senses. But the hardest desire to be free from is the desire for sex. Complete spiritual freedom includes freedom from sexual desire.

Let me say before we go any further, that most people will probably not want to read this article. I get emails from people who ask what to do about sexual tendencies or their desires to get married. So I wanted to write something for them. However, this is not for those who are materially inclined, but for those who should realize what is necessary if they want to make serious spiritual advancement. The point is that for those who are looking for relief, there is a way out of this illusion. Remember, as I have said many times before, suffering exists only within the illusion. There is only happiness and bliss in the Reality. The doorway to that realm has been given. It is only up to us to follow the path. And that path is merely a matter of adjusting our consciousness, freeing ourselves of the very attachments that keep us bound to this world. And that attachment is epitomized by our attraction to sex. Once that is overcome, all else on our path to spiritual progress, which evolves around developing love of God, will flow much more easily. Anyone who is serious about rising above the temporary attractions of the flesh may consider keeping this article to review later to regain clarity whenever your vision becomes dark or cloudy. So for those who are serious, let us proceed.

Let’s face it, most people in this world are interested mainly in the joys of eating, sleeping, defending or keeping what is theirs, and, of course, mating. Sex life is quite high on most everyone’s list of objectives or goals. Even those who consider themselves spiritually oriented still find that sex should be included in one’s life. And why not? What’s wrong with it? Isn’t that what we are made for? And how else are we going to have families and raise children? Thus, for anyone who wants worldly happiness, sex or sexual companionship can hardly be ignored. After all, this is one of the main objectives in life. But over the long-term, we should not neglect the spiritual purpose of our existence. And to be honest about it, the more we focus on sex life, the more one remains on the bodily conception of life, which is quite to the contrary of being spiritual.

If you are in the bodily conception, the more important the comforts and bodily pleasures will be to you. While on the other hand, the more spiritual you become, the more you can live without such concerns, without the dictates of the mind and senses being an influence on you. The freer and more indifferent you will be to them. Therefore, the more interested you are in sex, the less spiritual you are.

Real Happiness Means Freedom, and Real Freedom Is Freedom from Desire
Most everyone thinks that attaining one’s goals is the means to attain happiness. We can certainly see that characteristic in sports, for example, wherein the winner relishes the victory or conquest over others. It may seem like a great state of mind, until, of course, the next challenge comes along, which may bring another victory or a loss. And for the loser, we have all seen the bitterness of defeat.

This is the same way with sex. Some people may want to have sex simply because they are lusty and they want the release or gratification. Others think that it’s the way to find love, a deep communication with another being with the hope that it is a mutually satisfying experience for the other person. Sometimes it works out that way and many times it does not, as can be seen from the high divorce rate and extra-marital affairs that go on in the pursuit of mutual pleasure and satisfaction. And if one engages in extra affairs while married, it usually means the other person in the marriage is left with disappointment and devastation and divorce when what had been happening becomes apparent. So what is the cause of this discontent.

We have to understand that sex is the greatest of all frauds. Nature promises us a wonderful event, the height of joy, yet through such an act she also robs us of our powers, both physical and mental, and when we believe we have reached the limits of fulfillment, we fall lower than ever before. We lose a tremendous amount of energy through this process both in the pursuit for attaining it, and in the act of trying for sexual fulfillment. An old Latin proverb mentions that both humans and animals feel depressed after physical union.

After all, what is left of sex pleasure in the morning? Great fatigue. And this will repeat itself so many times. It is merely a continuous struggle for unattainable unison. A certain force, the power of attraction brought two beings together in search of each other. Later, this force is appeased through the act of sex, which may provide a release, like scratching an itch. But later all that remains is emptiness, and being alone, whether this takes place in days, months or years. Sex can satisfy only the body and even that is most temporary, but never pleases the soul. Those who do think the soul is involved remain in the depths of maya, illusion.

People who live only for sex live in continued unrest and dissatisfaction. They are never fully happy, and the gratification they feel from sex never lasts for long. The problem is that, as it is explained, unrestricted sex is most sinful, even to think about it. One’s duration of life, blessings, opulence, etc., are all decreased by such sinful acts, and the most dangerous type of sinful act is unrestricted sex life. (Bhagavatam  3.12.33)
The lust of sex desire itself is a type of sinful contamination. (Bhag. 3.14.16)
In this way, unrestricted sex is most dangerous because it is the most difficult to give up, and keeps one on the bodily platform practically more than any other attachment. Most other material attractions can usually be given up or outgrown, but the fascination for sex can hinder and remain with a person for many lifetimes. Thus, one cannot become free from the continuous rounds of birth and death, which is an elementary goal for anyone who is truly spiritually motivated.

Furthermore, the desire for sex means to identify yourself as a man or a woman and separate from that which you think you need to feel fulfilled, such as another material body for sensual gratification and happiness. The Self has no desire for sex, and is without sex. Therefore, the desire and act of sex is all an illusion because it has no relevance to reality, which is in connection with the soul. The Self is a complete whole, not half of something seeking its complimentary half. The whole idea of seeking one’s better half or soul mate is but another materialistic conception to justify what is but an illusion.

Union in spirit is possible, but union of the body is not, two individual bodies cannot occupy the same space. Because of the longing for unity and for expressing care and love, people try to unite their bodies, and “touch each other’s heart” as the saying goes, and therefore slide down into sexuality. Nature exploits this longing for union, the yearning for the long lost paradisiacal state of belonging, in order to beget new generations of people. Therefore, this yearning manifests in the material act of sex in order to maintain the process of procreation of the species, human or otherwise. The great disappointment is that sexuality cannot create real union, and, thus, the soul remains unsatisfied. Therefore, we see people which, regardless of how much sex or how many lovers they may have, remain feeling empty, incomplete, unfulfilled.

The higher, universal, spiritual love is on a completely different plane than the lower “love” of the animal plane, which is a manifestation of animal instincts, and which is the urge nature uses to propagate the species. Such love is a desire for gratification, possession, and always seeks the body of another. It forces a person to come close to the loved one, and embrace, kiss, hug, or to want to possess, which is nothing but lust, and which forces one to be more focused on the material platform of life. Thus, as one caters to this desire, one becomes increasingly bound to this worldly existence.

Whoever is subject to this kind of love is still living in a mental state of dividedness and separation, and tries to find a complimentary physical partner in order to find satisfaction. This love always seeks to take, to have, to possess. Spiritual love does not come from the condition of division, or to have, to hold or own, but from divine unity. Hence such spiritual love is always giving, never taking, and needs no physical manifestation or expression, but always radiates from the consciousness of divine all-unity. People who are conscious on this plane do not want to possess anybody; they feel themselves one with the Infinite All, the Supreme Being. That is our real goal. Thus, they do not burn with desire, but only shine with the love reflected from the Supreme. This leads to real wholeness and unity, real bliss and happiness, complete in one’s Self.

Soham: A Step by Step Approach

Practice daily at about the same time, starting with 10 minutes, and gradually increasing...

The Misunderstood ‘Kamasutra’: A Fresh Look at India’s...

Modern readers may be surprised that the ancient Indian text is, above all, a profound...

Vishnu is the All-Pervading One, derived from “vis’ in Sanskrit which means both...

sex is more than physical intimacy, it is the act of connecting with someone so...

In Srimad Bhagavatam, Vyasa had predicted the grim situations that would take place...